In our country, the majority of the population is fond of dogs. So how can you leave behind Hollywood celebrities from this amazing craze of dogs. There are lots of movie stars in Hollywood that love to have their pet dog around irrespective of whether they are on the sets or at home. In this write-up, we have tried to highlight these celebrities and their dogs. It shows how these superstars love their furry pals. Let us look at some of these Hollywood celebrities and their furry pals given below: 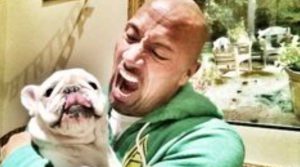 Having graduated from the field of wrestling, this superstar actor owns a little buddy Hobbs, named after his Fast and Furious character, Obvi. He loves the pet so much that Hobbs is around him everywhere from sets, to the gym and everywhere. He is even a great companion during the early morning workouts. Now we know how this great superstar has made a great physique!!! The secret is his pet dog Hobbs!!!

Hilary Duff and Her Dog She started her career as a child artist in one of the sitcoms and slowly but gradually has graduated to be in movies. This amazing lady is no stranger to dogs. In fact, she owns a Jack Russell Terrier named Jak and Bernese Mountain dog named Dubois. She is a dog lover and the sad part is that she lost her sweet Chihuahua, Lola recently which she chronicled on Instagram. She became a sensation during her childhood days and has since continued to have lots of attention in the media for her activities. But she has had pretty sad things happen to her previous dogs. Earlier, she owned a husky named Floyd that died, which broke her heart. She tweeted about the loss and even sang at a concert in the memories of her dog. Right now she owns a dog named Emu.

Ashley Tisdale started her career from sitcoms and has created a name for herself in Hollywood. She introduced her Maltese/poodle mix, Maui through You Tube as her “best friend”. She named the pet Maui because she visits Hawaii with her parents for birthday and it is a special place for her. Zooey is a reputed actress who has worked in Hollywood movies, including “If Only”. While looking for a dog at a shelter with her boyfriend, she came across two sisters, Dot and Zelda who got united after being originally separated. She currently owns both these dogs.

She needs no introduction because of her amazing talent. This superstar has a French Bulldog called Asia “Batpig”. She loves the dog and often dresses it in wigs and other accessories.

This amazing write-up shows the love of dogs, even in the showbiz. Hence, here is your opportunity to ensure that your furry pal has the best of the lives by getting Essential Dog Supplies and ensuring that he remains healthy and happy throughout his lifespan.